The University and the Vancouver Whitecaps Football Club have formalized a joint initiative to construct and operate a shared use soccer training facility at UBC. Alongside the UBC Varsity Soccer and Whitecaps Football Club, the new facility will also provide for a number of community and recreation organizations. The facility will form the centerpiece of the proposed National Soccer Development Centre (NSDC), which includes:

Capital funding for the facilities is split between the Provincial Government ($11.6 million), the Whitecaps ($8.789 million) and UBC Properties Trust for a total of project value of $22 million. The Board of Governors approved this proposal on June 2nd 2014, with construction on the playing fields targeted to start in August 2014 and a completion date of June 2015. The Wolfson West turf field is set to commence in mid-August. The filed house component is expected to be approved by the board in June 2015 and is slated for completion by December 2016. There is also planning work being undertaken to determine the location of short term parking, pick up/drop off, pathways, and a plaza. A link to the press release can be found here.
Click the following link for a live photo image of the new National Soccer Development Centre construction site: http://142.103.95.35/index.php?cam=2

Seeding has started on the natural grass fields that replaced the Varsity and Spencer artificial turf fields. Plans for reseeding the new field and continuing construction for the National Soccer Development Centre and artificial turf field are still going as planned. Fencing will still remain up until reseeding is fully finished in 2017. 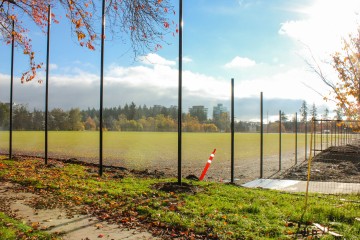 Construction has begun on the National Soccer Development Centre (NSDC) as of June 2015. The Varsity and Spencer Field natural grass upgrades have gone underway since the completion of the Lord and Buck natural grass field upgrades. As well, Wolfson West Field upgrade to an artificial turf is completed. More details about these field changes can be found in the Completed Projects section on the left of this page. 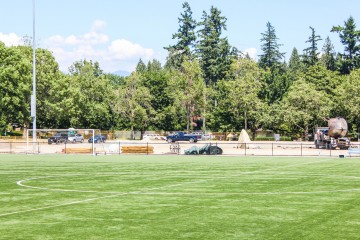 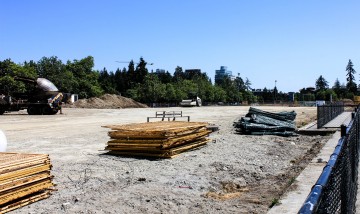 The Allan McGavin Sports Medicine Centre has been relocated since starting the NSDC construction in June of 2015. This closure will make way for the development of the Baseball Field House, the NSDC as well as a brand new artificial turf field and plaza adjacent to both the new training facilities. More information about the Allan McGavin relocation can be found here.